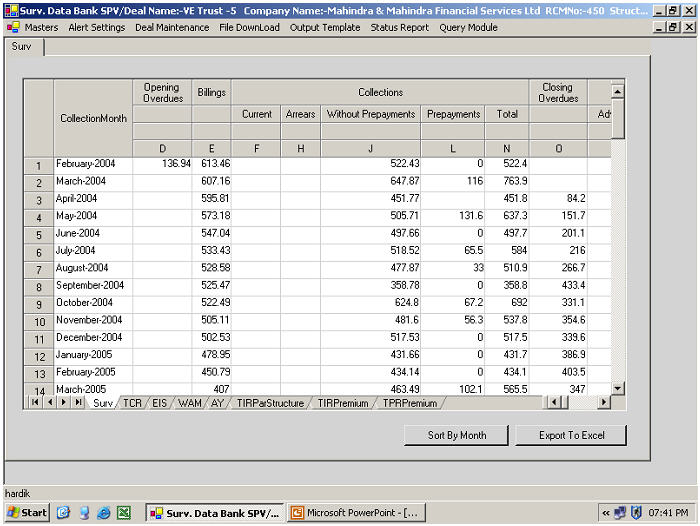 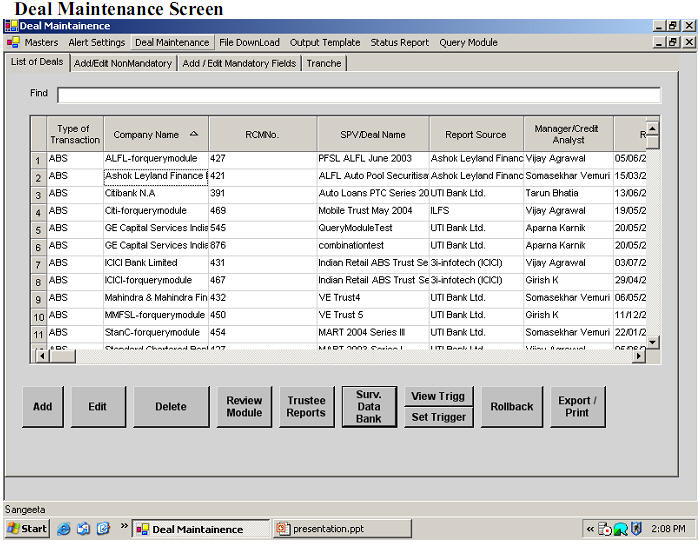 As a credit rating agency, CRISIL's role does not end with the issue of the initial rating for structured finance deals. CRISIL has a dedicated surveillance team, which monitors the performance of the securitised pool every month to ensure that it is in line with the outstanding rating.

Earlier all the data pertaining to the performance of these deals (rated pools) was maintained in excel sheets. For drawing conclusions or performing comparisons between various deals, data was pulled out manually from each of the excel sheets (output sheets) maintained. With the number of deals increasing, managing such data, performing calculations and tracking performance became tedious.

Run queries for comparison between deals

The system could open the Word Application but as a stand-alone application. So we could not provide the required functionality

Use of DSOFramer solved the problem. It provides all the functionality available in MS Word and it does not detach from the application. So the problem of providing the Word application in the system without getting it out of the system is solved.

As a stand-alone application, MS Word provides the functionality of fetching the data from SQL Server Database, but when it is opened from the system, it cannot do so.

The use of DSOFramer in this aspect solved the problem. Create Table in the MS Word and map the MS Word table cell to the columns in the table from the database.

To plot graphs at runtime

The development environment does not provide intrinsic graph functionality. There are numerous graph controls available to be used with DOT NET. We used Graphi from Code Project. This has solved the problem of integrating the graphs into the Reports and Query Module at run-time.

This spread does not provide any built in functionality to create templates. To solve this problem, the data from customize template screen are stored in the template table of the database and depending on the data, the system generates the template at run-time.

In the data entry screen of the system, there was a need to apply 'Goal Seek' to a cell in FarPoint Spread sheet containing Formula. The Goal Seek feature is available in MS-Excel but this feature is not supported by FarPoint Spread. So, to implement the same, the Goal Seek feature of MS-Excel is used from within the application using the object of MS Excel. The data from the spread is exported to Excel and using the application object of Excel, GoalSeek is performed and the result is again displayed in the FarPoint Spread.

Back Office System for MF/IPO distributors